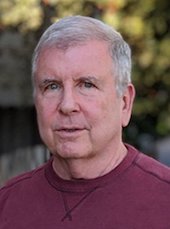 As another day comes to an end, the monk prepares for his nightly ritual. He takes deep, comfortable breaths as he warms the coconut oil, moves the massage table aside, and spreads his grandmother’s patchwork quilt on the floor in front of the wall mirror. He selects a tape of slow, rhythmic chants. He lights candles, as he begins to breathe with the music, effort on the inhale, relaxing on the exhale.

This is the night of the great slowdown. In recent weeks, the ritual seemed to have lost some of its vitality. Overwhelmed with and plagued by a growing number of distractions, the monk has had trouble focusing his awareness. On some nights he had shortened the ritual, jerked off and gone to bed. On other nights he couldn’t even touch himself. “Slow down the speed of your self-touch,” his spiritual advisor had suggested. “And remind yourself again and again of your intentions.”

After burning some sage he had gathered in New Mexico, the monk stands in the flickering candlelight, looking at himself in the mirror. He feels his chest swell with each inhale and his muscles relaxing with each exhale. He begins to say aloud his intentions.

As he takes off his clothes, he notices himself in the mirror. He laughs like a boy, amazed at how different he feels without clothes. He rubs his hands together, then reaches his warm palms toward his double in the mirror.

His strong masseur’s hands, so skilled at touching others’ bodies, now slowly begin to caress his own naked flesh. His fingertips brush across nerve endings from feet to head and down again. In recent weeks, he has been practicing giving and receiving touch at the same time. The trick was in his placement of attention.

The monk now begins several minutes of shaking every part of his body. The movement, gentle at first, becomes progressively more chaotic.

“I let go. I surrender.
I let go of how I think this meditation should be.”

And then the naked man begins to stretch aliveness into his neck and shoulders. With one breath for each turn, he rolls his neck a dozen times in one direction, then a dozen deep breaths in the other direction. He begins to allow sounds to escape as he exhales. He rolls his shoulders forward until the breath and the movement are one. Up the back on the inhale, down the front on the exhale. He then reverses direction. As he continues to stretch other muscle groups, his awareness focuses on the tinglings and vibrations in his hands, wrists, lips and thighs. His groans of release evolve into moans of aliveness. The thoughts of the day have become silent.

“Happy and aligned with the One are those who find their home in the breathing.”

The monk, his breath still dancing with the music, looks at his naked double in the mirror. With his palms together at his heart, he bows, honoring the man he sees reflected in the candlelight. His gaze moves from his heart area down to his genitals and back again. He lets his eyes shift to soft focus as he pours oil into his hands. It is time to anoint–slowly, ever so slowly–the places from which his love flows.

“As I caress my body, I am aware of touching the whole universe.”

Warm palms rub warm oil into heart, into genitals. Then the monk slows his breathing, stops massaging, one hand resting on his heart, the other cupping his genitals. He again prays, touching the places of love.

“As I receive pleasure, so the whole universe receives pleasure through me.”

He now begins his nightly dance, massaging his genitals, his heart and the pathway between. His breath quickens.

“When I’m hard, I remember my heart.

When I’m hard, I remember my belly.

When I’m hard, I remember to breathe.

When I’m hard, I remember my feet,

When I’m hard, I remember my asshole.”

“When I’m hard, I remember Mom and Dad.

When I’m hard, I remember to stop speaking.”

Laughing at the wonder of it all, the monk continues to massage himself while breathing, while dancing. After ten minutes or thirty minutes, he slows down his body, reaching his arms straight out from the shoulders, his palms facing upward. He increases the dynamic tension in his muscles, especially in his upper torso.

From the center of his chest outward he begins very slight movements, a vibrato from his heart. The warmth and intentions of his love begin to spread through his taut muscles to all parts of his body and to every level of his being. Although he totally controls the flow with his muscles and his breathing, he prays for those nights when he can let go and this sacred tremolo of heart plays him. In less than three minutes, this heart vibration fills him with gratitude.

“When I’m hard, I remember death.

When I am hard, I remember my body.”

The monk finishes his soloving ritual with a few minutes of sitting quietly. He then wipes the oil from his body. No words, no thoughts, just quiet breathing. He blows out the candles. He climbs into his bed.

by Joseph Kramer from the anthology:  Our Families, Our Values: Snapshots of Queer Kinship. Edited by Robert E. Goss, Ph.D.